Running for Prime Minister isn't all about fun. Obama's got a serious plan for the future, Canada.
This is a plan that involves real change â€” the Loonies and Twoonies kind.

Thus began a mock blog, Barack Obama for Prime Minister, now also a Twitter feed. With the Canadian elections looming, the bloggers are expressing their preference for Barack Obama over the other candidates. The group is also selling a selection of hilarious t-shirts on their blog… 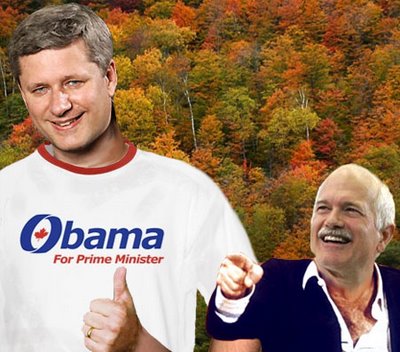 One dollar from every ‘Obama for PM’ shirt sold is being directed to the Canadian Red Cross and their future disaster relief efforts in Canada.

Obama for PM thanks you.

Lest you think they're crazy, the bloggers give an explanation for their support of Obama for PM:

This campaign was inspired by polling data that showed Canadians prefer Obama over our own leaders; Obama 26%, Harper 21%.

(UPDATE! September 23rd Poll shows that Obama has 42% of voter support compared to Harper with 29%. LANDSLIDE!)

A recent article mentioning this site best explains the biggest impact that “Obamamania” may have on the Canadian electorate: forcing people to think seriously about the kind of future they want.

The aforementioned recent article, in the British Columbia TYEE blog The Hook, writes of the blog:

Despite the fact that the site appears to be little more than an inventive way to sell novelty t-shirts, it poses an interesting question: Are Canadians more interested in Obama than their own federal politicians?

Most importantly, although the blog is mostly a money-making venture to sell t-shirts, it carries an important message across the bottom, which reads:

Barack Obama for Prime Minister is intended as a parody and is not affiliated with or endorsed by Barack Obama or any political party. All transactions with vendors linked from this site are solely matters between those vendors and their customers. In whichever country you are living in and whatever your political persuasion, please be sure to vote in your election.