The self-confessed moose-hunting hockey mom Sarah Palin has spent a whopping $150,000 on hair, make-up and wardrobe, shopping in places where Joe-six-pack would only dream of window shopping. Bloggers from around the world react.

From Bangladesh, Mash has a headline which screams: Sarah Palin: Elitist Fraud. He explains:

Sarah Palin spends about as much on clothes in a couple of months as Joe The Plumber makes in four years. The Republican National Committee has spent $150,000 on Sarah Palin and her familyâ€™s clothes since she was selected as the vice presidential nominee in late August.

Some of Sarah the Hockey Momâ€™s notable shopping sprees:

I am going to take a wild guess here. I am going to guess that the simple folks and hockey moms she claims to represent probably do not shop at Saks or Neiman Marcus. This woman is a joke and a fraud. 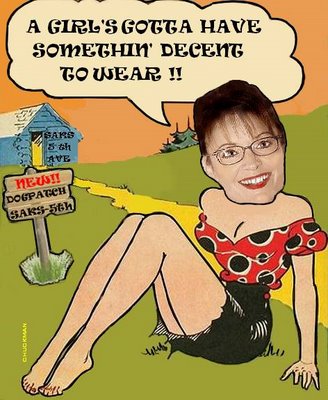 From England for Obama, Andrea Mann asks readers to compare and contrast between Palin and Barack Obama, when it comes to clothing and shopping sprees.

Hmm, now, remind me: whoâ€™s the regular mom? Whoâ€™s the elitist? And which team is it that understands ordinary Americans?

Egyptian Zeinobia is annoyed that Palin's special needs son, Trig, is being paraded in the media in “not so nice clothes.” She writes:

By the way why his mom did not buy him nicer clothes than those clothes he appears in the photos with all those thousands she spending, it is not a bad thing to look nice in the political arena , she looks better than Hilaryâ€™s suits.

Jordanian Hani Obaid says Palin brought the attention to herself.

Every morning before work, I read the headlines on Google News. I was surprised this morning that the top headline was related to Sarah Palinâ€™s wardrobe! It seems the RNC (Republican National Committee) spent $150,000 to spruce her up, and this is angering some supporters. The press found out from financial disclosure reports.

Donâ€™t get me wrong. I wear tracksuits or shorts depending on the fashion in Milan that week (not really), but people who spends this kinda money on clothes are asking for attention.

Along the same line, Rodrigo Morais, a Brazilian who lives in Abu Dhabi, UAE, says in a post entitled Let's go shopping, darling! that the latest shopping bill shouldn't have come as a surprise, considering Palin's bad habits as the Governor of Alaska.

It had already been made public that this lady, when she was Governor of Alaska, won a small fortune in public funds to take her whelp for a trip every time there was an event outside her state. Events for which the kids had never been invited… Now the news is this 23 thousand bill (the price of some houses) from money invested from donations (lobbying and some people who do believe in them) spent on clothes and accessories to put lipstick on the pig and on the rest of the family… Well, guess what, you can put lipstick on pig, but it's still a pig.

A Brazilian living in the US Leila Couceiro, in the post “Buy, Baby, Buy”, points out that Palin only likes the most expensive shops – Neiman Marcus, Barneys and Saks Fifth Avenue, where she spent more than her annual salary as Governor of Alaska. She details the items and prices on the bill and concludes:

In other words, while her political propaganda is based on her supposedly fiscal austerity, what we can see is someone who is financially taking advantage of her public position.

It is always fascinating to see biased news organizations accidentally reveal why they ran a specific article: itâ€™s yet another attack. They will now try to present Palin as someone who is out of touch with American voters, who spends big on clothes and make-up: in other words, one of those elite women who care deeply about looking good and nothing else.