Obama: Still not an Arab 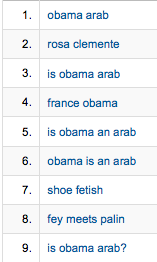 After more than 20 months on the campaign trail, dozens of interviews, thousands of headlines, it seems some people still aren't sure whether Obama is “an Arab” or not. He is not.

Looking at the statistics for visitors to Voices without Votes we can see that a large number of readers are coming to us via search engines with queries like “obama arab”, “is obama an arab” or “obama is arab”. In case you are one them, please spend more than a few minutes on this website. Shoe fetish people, you're in the wrong place.

On South Asian blog Desicritics.com, Aditi Nadkarni based in Ohio, writes a tremendous post on the racism surrounding the McCain/Palin campaign, including the fervent use of Obama's middle name “Hussein” to hint at some form of Arab or terrorist connection.

The “Hussein” paranoia has led some very Christian people to forget how many times the word “Barack” appears in the bible. The military “terrorist fighting” Americans in their patriotic zeal, have also forgotten that an Arabic first name did not stop the likes of Omar Nelson Bradley from being one of the main U.S. Army field commanders during World War II all those years ago. Now, while it is very disturbing that people would suddenly grab at a middle name to establish Arab ancestry and “terrorist inclinations”, what bothers me even more is that nobody, not the media, not the candidates, not even the usually outspoken members of the blogosphere have the gumption to at least try and dissociate the mere “Arab” epithet from “terrorist”.

England for Obama suggests there should be a citizenship test for the entire planet that requires everyone to learn a bit of history and world culture: “Lessons in Humanity”…

That way, no one would come up with the illogical association made not only by that â€œcrazy ladyâ€ (as SNL calls her) at a McCain rally but implied by McCain himself, to wit: â€œArab = Muslim = Terrorist.â€

What many Americans donâ€™t realise is that there are Arabs of many faiths, including Christians.

Jordanian blogger, Naseem Tarawnah on Black Iris, thinks “race has never played this big a factor in a US election” and questions the scientific accuracy of the so-called Bradley-effect the media keep discussing in spite of Obama's leads in the polls.

The blogger himself, however, is not entirely sold on Obama as a candidate.

My reluctance to get on the Obama bandwagon has mostly been due to the fact that he has this seemingly cult-like following. He is seen as this messiah of change, and is described and depicted as almost prophet-like. I have a problem with anyone who puts that much faith in a single politician, especially an American president. If the on-going history of America has shown the world anything, itâ€™s that change (in the positive sense of the word) is not a big factor in a US presidency. So I am constantly astonished by any Arab who is entranced by Obama and have to constantly remind myself that most of the fan base in this part of the world comes from a particular more-westernized demographic and have been swallowed up by the wave of US election culture that is dominated by Obama. Everyone is entitled to their own perceptions but I remain realistic to the degree of change that is expected with either candidate in the Oval Office.