The View From Morocco

On the eve of the elections, the world is atwitter – and Morocco is no exception. Bloggers based in Morocco – both Moroccan natives and foreign residents – are musing over potential election outcomes. While Morocco is also no exception to the world's preference for Obama, bloggers have a lot more to say than “Yes we can!” Here's a peek into Morocco.

Fulbrighter Morocco Road is anxious about being so far from the elections. The blogger says:

And like many Americans both abroad and back in the States, this anxiety has translated into inactivity. Or a sort of constipated nervousness where I need the days to pass as quickly as possible. Larry David, the Seinfeld guy, says, “I can't take much more of this… I'm at the end of my rope. I can't work. I can eat, but mostly standing up. I'm anxious all the time and taking it out on my ex-wife, which, ironically, I'm finding enjoyable.”

It's the same for me here in Morocco, but I feel even more disconnected. And I especially miss the commentary of the media's talking heads. It has been so difficult for me to interpret the current state of world affairs without them!

Moroccan native allal-cinemagoer, whose blog discusses cinema and movies, has a message about the arts for the candidates:

However,because of the dangerous change that our world is going through especially Americaâ€™s values and its famous civil rights are now at stake and most important we are going to have a new president who might again intensify war around the world, I just want to say that whoever win the battle to Washington Dc to become the president of The U S A ,Hollywood should reconsider its policy to produce movies of great talent based on dialog , love and especially altogetherness rather on discrimination,xenophobia,hate of Arabs,blacks,Hispanic,women,homosexuals etc.. .

Peace Corps volunteer Elizabeth of the blog adventures of a young twentysomething has found US politics to be meaningful to her Moroccan host family. She shares an amusing anecdote:

Yesterday, it started snowing heavily. So I did what I usually do when I don't want to be in my house along; I went to my host family's. I sat around the fire and read a book. After a couple of hours, I turned on the TV. To my surprise and pleasure, the Daily Show came on. Ali, the now 15-month old, started pointing to the TV when the guest, Barack Obama, appeared. I wish my camera had been with me.

Just this week, Ali said his first word, ‘Baba,’ which is oh-so-close to ‘Obama.’ For about an hour, I practiced the word ‘Obama’ with Ali. But there was no luck. Maybe with more time, it will become his second word.

Author and blogger Laila Lalami shares a link to a story in the Guardian, explaining:

On the eve of Election Day, the Guardian newspaper has asked a few American writers what they think of the presidency of George W. Bush. As you might expect, none have anything good to say about him. There is outrage, there is anger, but there is also humor. Hereâ€™s Tobias Wolff:â€When I see someone being rude to a waiter, or blocking the road in a Ford Expedition, or yakking loudly on a cell phone in a crowded elevator, I naturally assume they voted for George W Bush.â€

But the rhetoric of “change” is never far away. Moonlight shares a simple image to highlight her feelings on the subject: 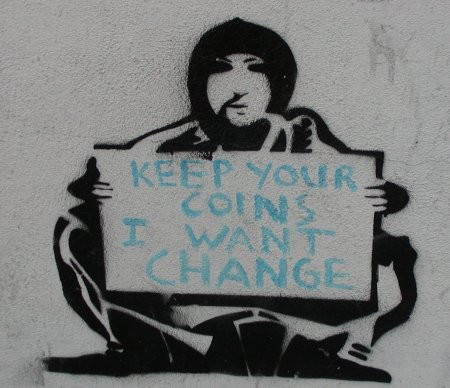