Watching the U.S. from Down Under

A desire for a new attitude by the U.S. to international relations is a subtext in many recent blog posts in Australia. The concern that John McCain will be more of the same is never far from the surface.

The Road to Surfdom, no admirer of George W. Bush, was concerned about hypocrisy by the nuclear club, the United States, Russia, China, Britain and France, over nuclear proliferation. The usual suspects of course, Iran, North Korea and Syria:

I guess itâ€™s understandable that these guys should have meetings and fulminate about nuclear proliferation but in all honesty, the yanks and the French and probably the Brits should have thought about all this back in the 1960s or whenever it was they helped Israel get The Bomb. And doing nothing more than making a few unhappy noises when India and Pakistan started testing their little toys wasnâ€™t really a credibility-enhancing move either, for any country that wants to tut tut now about the evil Persians.
The nuclear elephant in the room (10 May 2008)

In his analysis of the primary race, Gary Sauer Thompson took a global economic perspective:

Clinton is engaging in China bashing- blaming China for the loss of manufacturing and blue collar industry jobs— to shore up her conservative white working class (Reagan Democrats?) support in North Carolina and Indiana. The economic context in America is the recessed economy with the consumer overstretched by falling real wages, job losses and plunging house prices.Clinton stands for protecting working class jobs in dying industries in a globalised world, even though the Clinton administration passed NAFTA, accelerated trade with China and India, focused on knocking down various protectionist barriers, etc. It is the fear card being played, as Clinton blames China for taking away manufacturing jobs from the American workers and manipulating the US currency. America needs to get tough on China etc etc.
Public Opinion (5 May 2008)

Terry Flew had a similar take on the politics of the U.S. economy:

Aside from the Democrat primaries, the major talking point in the U.S. this week is whether the United States is losing ground in the global economy. This is different to the question of whether or not the U.S. economy is in recession (or ‘slowdown’ as GWB prefers to put it), but is rather about whether the U.S. is losing the competitive race against the emergent economies of East Asia and the Middle East, and indeed to Europe.
Is America going backwards economically? (8 May 2008)

An Onymous Leftyâ€™s Jeremy Sear applied his characteristic humour and sarcasm to Hillary Clinton in this message to Democrat voters:

I expect a Republican like McCain to push any kind of tax cut, no matter how stupid and counter-productive, but a Democrat? Apparently Hillary will shamelessly try anything. If you can convince some dribbling idiot from Pennsylvania that cutting petrol tax will actually result in a real saving to him, and not just a massive publicly-funded windfall for the petrol companies as they raise their prices and absorb the cut, whilst other taxes rise or public services are cut to cover the shortfall… well, maybe you might be able to win an election!
Hillary as shameless as Steve (5 May 2008)

His advice to Hillary was even more pointed after the North Carolina and Indiana primaries:

If you keep going and cause Obama to lose to McCain in November, you are going to be the most hated person alive. Even though the reason the world will hate you is that you gave the presidency to McCain, you will (admittedly quite illogically) be even more hated than he will be, and probably just as hated as the appalling President you wanted to replace. I know that's not fair, but fresh anger trumps well-worn contempt. You're already reviled by the righties – very soon you'll be reviled by everyone. Offer to be Obama's Vice President. Do it now.

In â€˜closing roundsâ€™ (10 May 2008), Gus Leonisky, the resident cartoonist at Your Democracy, had Hillary on the ropes or was it down for the count: 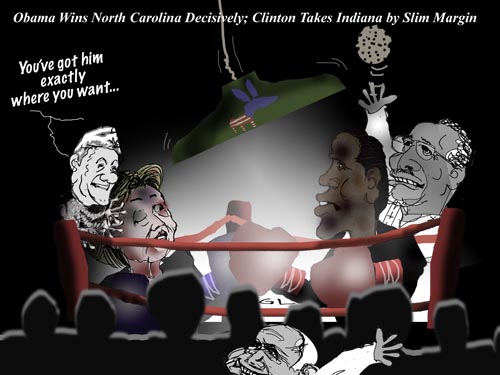 Most progressive bloggers are still hoping for a knockout blow so that the real contest can begin. Many would be happy to see an Obama-Clinton ticket.

Tim Dunlop at Blogocracy seemed to be hoping in vain:

On the surface, after the vitriol and attacks of the primary season, a joint ticket seems almost an impossibility. Almostâ€¦
Bye, bye Hillary? Hello Obama-Hillary? (9 May 2008)

We are all looking forward to the main event!