What the World Wants

A quick glance at Voices without Votes or the global blogosphere and it's clear who the world wants for president: Barack Obama. It seems that, despite the relative closeness of the race in the United States, the rest of the world likes his charisma, his foreign policy, his take on the issues, and perhaps most of all, the fact that he's so different from George W. Bush, whom it's clear the world does not approve of.

There are a number of global election maps tracking the world's opinion. While they are by no means scientific, they all seem to point in the same direction.

A collaboration between Gallup and Foreign Policy entitled If the World Could Vote shows a map of the world, color-coded for Obama and McCain supporters…only there are none of the latter (rather, much of the world is undecided/unknown, while the rest is replete with Obamania). A screenshot taken on October 29, shows the top 10 countries supporting Obama and McCain: 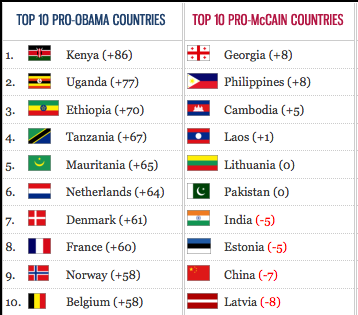 A similar site, incidentally also entitled If the world could vote, has the same goal. The site, considerably more amateur, was created by a twenty-two year old in Iceland. In their FAQs, they explain why they're tracking the world's opinion:

Just out of curiosity. The president of the United States is a powerful man, probably the most powerful person on the planet. So everyone seems to have an opinion on who should be the next president of the United States. We thought it would be interesting to see who would be the next president if the whole world could vote. It's also a challenge to try to beat the number of voters in the last US elections. So spread the news!

Yet another project, entitled The World For, also allows users to vote between Barack Obama and John McCain. A screenshot of the site on October 29 shows only a few countries leaning toward John McCain: 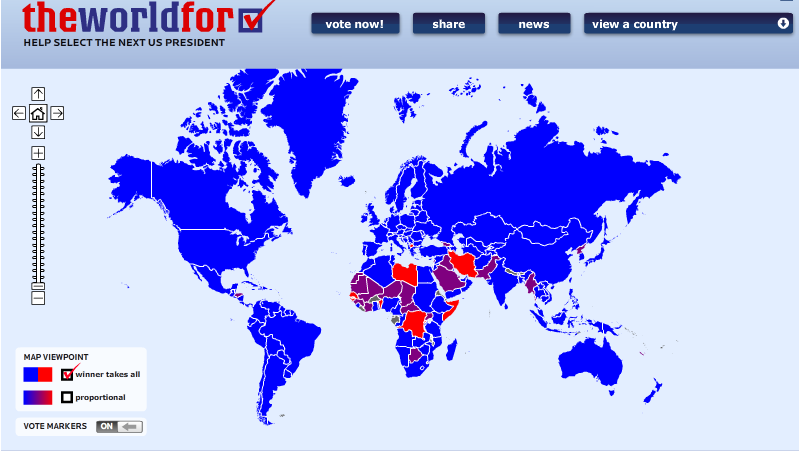 Among the countries backing McCain, according to the site, are Libya, Iran, and the Democratic Republic of Congo. Yet, another similar site from The Economist shows its Iranian votes to be in marked contrast to those from The World For.

According to The Economist‘s site, Iran supports Obama 85% to McCain's paltry 15%. While one site may be a more clear indicator over the other, it's simply not clear which.

A fifth and final site entitled The Takeaway has a Vote 2008 page that has partnered with Voices without Votes. The global portion of their special project indicates, unscientifically, how many electoral votes each country would get if they were to have a vote. In their words:

As part of The Takeawayâ€™s International Electoral College project, weâ€™re assigning Electoral College votes to countries. Itâ€™s very unscientific, but if citizens in other countries could vote, weâ€™d want to play around with some data and weight the votes based, not on population, but on numbers that show the political, military, economic and social ties between the countries and the United States.

Explore the lists below and tell us what you think. Any surprises? Which country deserves more delegates? Which deservers fewer? And, most importantly, Why?

What do you think about the U.S. elections? Try voting at one of these sites, or if you're a blogger, submit a link to us!