Halloween: A Pre-Indicator of Election Results?

Halloween is only a few hours away in the US…and as trick or treaters piece together the last of their costumes, the elections may be weighing heavy on their minds. For some, the elections and Halloween go hand in hand. Obama masks, do-it-yourself Sarah Palin, even a politically incorrect Hillary Clinton mask will all be on display come Halloween night.

For those not in the United States, the whole thing may just seem a bit absurd. Or maybe not…The Times Online‘s Hattie Garlick explains why Halloween costumes are a good indicator of public opinion:

Halloween masks have history as a litmus test of America's choice. In 2004, Bush masks outsold Kerry two to one at the US's biggest seller of Halloween masks, Spirit Halloween. Sceptics leaning towards other explanations for this phenomenon – by 2004, few things stood the chance of terrifying frayed Americans like encountering George W in the shadows of their porch, ringing on their doorbell – should bear with the evidence. Gore sold 14 per cent fewer masks in 2000, and in 1996 Clinton masks won with 71 per cent of sales.

So what are the masks telling us this year? The riff blog has surveyed the outlets.

Amazon currently has Obama leading by seven points, unnervingly close to Real Clear Politics’ average of more conventional national polls, which gives him a 6.8 point lead, (though here, as in latest national polls, Obama's economics favour him: at only $12.90, his mask, as Mother Jones points out, is five cents most affordable than McCain's).

Over at Buycostumes.com, which boasts ‘The Official 2008 Presidential Mask Poll’, Obama is ahead 54 to 46. Nothing though is set in stone. Sarah Palin masks are outselling Joe Biden three to one. 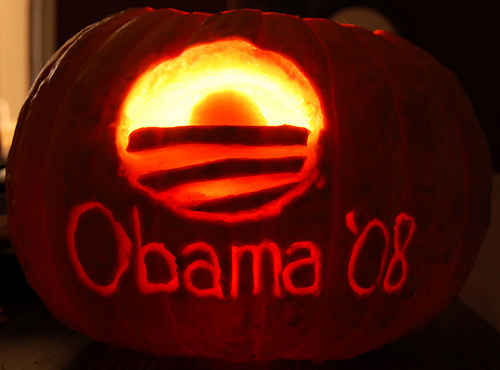 The UK's Market Oracle chooses to take a more figurative look at Halloween and the elections:

There are a lot of scary things in this world, but one of the scariest is that Halloween and the Presidential election are only five days apart. It's hard to miss the parallel between tricks-and-treats and the promises-and-panderings of politicians masquerading as the most caring, most vital, most sincere candidate. While standing behind their lapel flag buttons, they are quick to dress their opponents in something less patriotic.

The blogger goes on to suggest potential costumes for the candidates:

The Republican right wing wants to dress Barack Obama as a socialist terrorist, putting on him a large black beard, a kufi hat and abaya robe. Instead of handing out candy, these wing nuts have Obama handing out dollar bills, which he stole from hard-working conservative millionaires.

The Right Wing doesn't say much about Joe Biden, knowing he's sharper than any of the candidates about foreign affairs, but he does occasionally put a foot in his mouth. Maybe they can dress him as a podiatrist.

The Democrats want to glue John McCain to George W. Bush, and parade them door-to-door as conjoined twins. Assuming that isn't acceptable to McCainâ€”at least nowâ€”maybe the Democrats can dress McCain as a Mission: Impossible tape recorder, knowing at some point he'll self-destruct.

It shouldn't be too hard to find a costume for Sarah Palin. During the past two months, the Republicans spent $150,000 on clothes for her and her family, plus at least $23,000 for makeup. After figuring out that the nation is in a Recession, that most Americans don't even earn $170,000 in three yearsâ€”and that some outraged Americans found out about her shopping spreeâ€”Palin spun out and claimed that the clothes really aren't hers and will be donated after the election, most probably to starving Republican day traders. For Halloween, and for a truly scary appearance, maybe Mooseburger could remove all the makeup and lipstick her handlers put on her to make salivating middle-aged men believe that outward beauty is an acceptable cover-up to inner vacuousness. 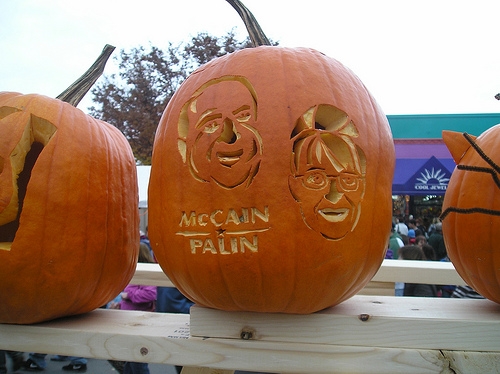 An Open Letter to Obama on Racism in Denmark