What will be the deciding factor for the 2008 presidential elections, you ask: Race, Age, National Security, young people's involvement ? Money seems to be the consensus among French blogs that closely follow the 2008 presidential elections. They argue that the ability to sustain the important spending for both the Democrat and Republican campaigns will ultimately be the deciding factor come November.

Maria Pia Mascaro on her blog, west wing 2008 carnets de champagne, explains Obamaâ€™s decision to not use public federal funding to finance his campaign (fr). His decision was criticized by McCain, who pointed out that Obama made a promise to use the federal funding system last year.

Mascaro explains that Obamaâ€™s decision was easy to understand from a financial standpoint because his campaign was very efficient at raising money from the general public. Individual small donations would allow Obama to collect more funds than the one provided by the Federal public funding ($81.5 millions USD).

Additionally, associations known as the 527 group (not for profit organizations that represent lobbying group, unions or citizen movement) can greatly impact the elections with their fund raising activities. Mascaro recalls:

Letâ€™s not forget the strong campaign against John Kerry led by the Swiftboats Veterans. That campaign party justified Obamaâ€™s decision to counter the Republican 527 group. 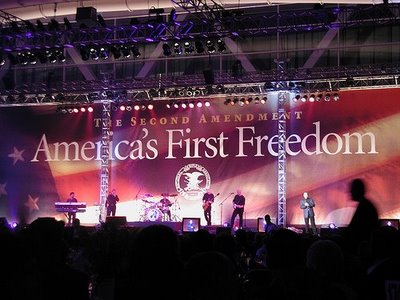 Although the association has yet to endorse a republican candidate, â€œRegard sur les Etas-Unisâ€ states that the NRA plans to spend $15 millions USD to illustrate that Obama is a threat to the Second Amendment of the Constitution.
The blog also points out:

During the 2000 presidential elections, many political analysts estimated that the maneuvering of the NRA cost Al Gore his own state of Tennessee, Arkansas and West Virginia.

This is why, according to Regard sur les Etas-Unis , Obama has been very careful not to take sides on any issues regarding the 2nd amendment. The NRA has yet to support McCain because McCain stated in 2000 that the support of the NRA was insignificant for the republican party.